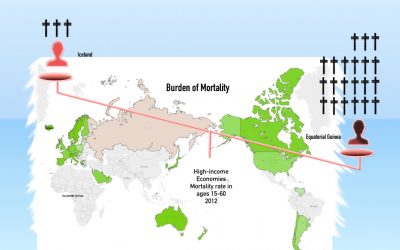 Time really does fly when you are having fun!

I have reached the end of my last sprint, and my eight day internship with OptimalBI.

What a different world to government biosecurity response! I’m not sure I ended up 100% where I thought I would, but the journey has been fantastic. From pouring through gnarly global data sets (and all the issues of matching what I would like to find, to what is really there!) to gaining an appreciation for telling the story of the data, and how to coherently lay facts out on canvas, it has been a really useful eight days.

I have a new appreciation for good infographics. It is so much harder to simply data into an image than I had thought, even when the idea seemed so obvious in my head. I have learnt a lot, not least that I have a lot to learn!

I find the data of mortality rates in adults that I have been looking at is pretty fascinating, and frankly, I am really really appreciating that I am a New Zealander right now. That we don’t have the horrific diseases and wars that other countries have and still do, suffer through.

In the data I looked at the best and worst mortality rates for people in the 15-60 age group on record.

The best being for females living in Iceland in 2012, and the at worst being for females living in Zimbabwe in 2000, the difference being the rate was 21 times higher in the later group, meaning only about 336 women in 1000 were likely to live to 60 years old. Even today, in what are considered high income economies, the differences were pretty startling.

From studying death I have certainly gained an appreciation of life.

And so my internship has come to a close. I have been so welcomed and included at OptimalBI, they have been fantastic, and I am very grateful.

On top of the data visualisation and Agile technique I’ve been focused on, I have learnt a lot about the wide world of data warehousing, and storage.

Ok, so I haven’t learnt “a lot”, but a lot compared to what I did know, and enough to realise it is a huge, curly and challenging area! I am really looking forward to getting into more data visualisation in future, but for now, my next stop is Hawaii!


Esther is doing a short 8 day internship (over 4 weeks) to decide if she wants to change careers from studying exotic diseases (Epidemiology) to becoming a Data Story teller.
These are her guests blogs on her experience.