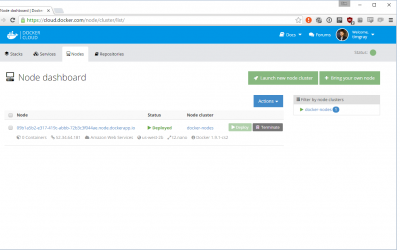 Recently the cloud space has got all Dockery and another tool has popped up in the space from Docker themselves, Docker Cloud. This tool allows you to do all our Docker service maintenance from a central dashboard no matter where we are deployed.

What does it do?

Docker Cloud gives you a one-stop-shop for running our services that we have dockerised. You can easily scale up and down the size of your nodes. You can stop and start services as well as view the overall health of your system in one glance. This allows you to give a dashboard to your Dev Ops team that isolates your on-site servers administration, hardware, and network administration.

Does it play nicely with AWS?

Yes, it does! Just input some IAM credentials and Docker Cloud will take care of the rest. To get a node cluster started all you have to do is pick a region and a size, then Docker will boot up an EC2 with all its needs to get going. It even plays ball with any VPC’s you have setup and will allow you to pick one if there are more than one configured. Once you have that sorted all you have to do is define a service using one of the thousands of docker images on Docker Hub or one you have created yourself. Docker Cloud will then pick a node, run the service, and give you feedback. You get information on performance, IP addresses assigned, and the logs from the service itself.

Running Docker on AWS has gotten more interesting since now AWS and Docker have GUI’s to help you run Docker in the Cloud. The docker GUI is easier to use and is a GUI all the way down, whereas Amazon ECS requires a little mucking around in the AWS CLI. Docker Cloud also makes it a lot easier to find some of your logs as they are available from the Dashboard, with AWS ECS you have to hunt around on the EC2’s themselves to find them.
One thing to note is AWS ECR does not work with Docker Cloud so if you have your Docker images stored there you will have to move them to a more accessible location or wait until ECR is supported by Docker Cloud.
In Amazon’s favour is that ECS does not increase the costs of running Docker in the Cloud as there is no additional cost other than running your EC2’s.
All in all, I like more choice in the cloud and will be watching this space for some time to come.
Coffee to Code – Tim Gray