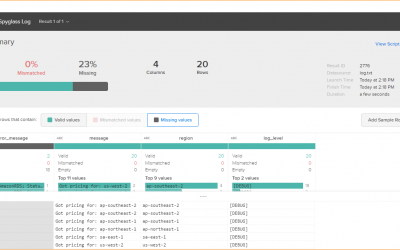 We have been playing around with Trifacta a lot recently. As we know Trifacta = I can code (well, sort of). But as with any code we want to be able to save it, store it in Git and reuse it. Here is a short tutorial on how to get your script out of, and then back into, Trifacta Wrangler.

Exporting from Trifacta Wrangler is easy!
Pop open the script view from the right

Then Wrangle Script and save in the desired location

Once done you should have a script a bit like this:

Importing a saved script into Trifacta Wrangler’s free version is a bit more tedious though no more difficult.
Create a Dataset, Select the Data and open the Transform view.

Now for every line in the script (except the first line in most cases) copy and paste into the Transform Expression box and click add to script.

Once this has been done for every line in the script we are ready to go!

Now that we know how to get a script out of Trifacta what can we do with it? The easy answer is put it somewhere safe, for example Git. My favorite thing to do is use this recipe somewhere else like Python to take more direct control of my data. We might hear more about that later. Until then have fun with your precious Trifacta scripts.
Coffee to Code – Tim Gray