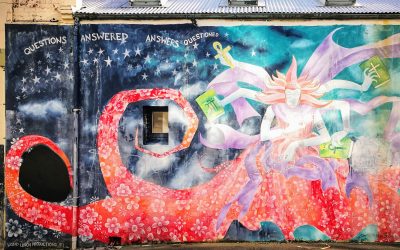 Webstock 2018 – AKA the monsters are coming but there is hope

It’s always hard to know what to expect from a conference, and I think Webstock is especially hard to pin down.

For me, I saw Webstock as a conference of big ideas where lots of very, very smart people try to share their impassioned views of how the world (and especially the digital world) should and could be better.
Some of the presenters approached this in a more technical way, telling us about systems engineering and image caching, but most took a far more philosophical big picture approach, discussing ideas and issues that exist in today’s world of the web. Personally, I was fascinated by the latter and completely overwhelmed by the scale of everything.
Artificial intelligence (AI) was a recurring theme which may of the presenters talked about, and quite frankly my mind was blown. By the end of day one, I was imagining AI as a human child, because that’s the way that my brain could make sense of it, and the concept of ‘learning’ had a huge ah-ha moment. AIs need a basis of information which it considers facts, and all future actions are based on that information – just like a child. What machines lack, however, is empathy and values which are far more vague and hard to teach to a computer. The result is that we end up with AIs such as ‘Tay’ the infamous twitter AI who learned from the conversations she had and became all the worst parts of the internet. The saddest part was realising that if an actual human child had been raised on the kind of things that Tay was learning from we would be totally unsurprised when they started spouting the same hate speech. The moral of the story is that an AI is only as good as what it’s taught.
Tay is obviously a pretty extreme example, but it proves the point that AIs are basically a huge information sponge and unless we have the right structures in place to make sure they have as little bias as possible we will always end up with monsters. Feeding them a few edge case diversity stats doesn’t help either, because as with any good information processor – edge cases are widely ignored.
Another hurdle to inclusive and moral AI is the fact that the people building them and the people they are being built for are totally unrepresentative of the world’s humans. Alexa, for example, is a personal assistant mixed with a smart speaker. The market it’s aimed at is maybe 1% of the world… on a good day. It’s made in the US, so will likely be programmed to think local and understand US accents. It’ll probably struggle with speech impairments so if you have one of those – good luck. Oh, and if you speak using slang specific to various ethnic subcultures you’re going to have to wait until 2050 for that upgrade.

AI has a long, long way to go before it becomes accessible to the masses. I understand that companies need to make money, and the easiest way to do that is to focus on the people who are going to be your early adopters (let’s call them Steve, because you all know what a Steve looks like…) and you want a product that will appeal to the majority of them. You don’t necessarily care about the edge cases. The problem is that there are a heck of a lot more of those edge cases than you think, and every time they can’t use your product you lose a customer. A product that can’t understand its user is more than useless- it’s telling them they are worthless. The worst part is they’ve almost definitely heard that implied message more than once before. Every day people who fall outside of the “Steve” category get that message. “This product is not for you”.
See? These are the monsters I was talking about. They may seem small, but there are hundreds of them. It’s not all doom and gloom, however. As the title suggests – there is hope, and that hope starts with you.
When you develop your next thing, or when you talk to someone who is, try to think outside of yourself and the demographics you live in. Talk to a friend of a different background (even better – have diversity in your team!) and see if they have any thoughts from a different perspective. Maybe you haven’t considered people with 6 or 7 names, maybe you haven’t considered people who use button phones because of limited hand mobility, or maybe you could include a different language in there to reach another audience. As soon as you consider and cater to those people you are being part of the solution and you are showing them that you care.
Inclusive design is not just the right thing to do. It’s also good business sense because it broadens your potential customer base and gives you better brand image, so if none of my emotive rantings has penetrated your scepticism then I guess there’s that. Design for Steve, but also for Soo-jeong and Sophia and Salih.
If I could summarise my biggest take-home message from Webstock it would be this – the world is full of intelligent people, so set yourself apart by being kind.
~ Caitlin